[Guangzhou Dehong] Silver dollar, also known as silver coin and foreign currency, originated in the 15th century and was originally cast in Europe. It is the main currency of the world's silver-based countries. Around the 16th century (Ming Wanli), the silver dollar flowed into China. The large amount of silver coins that began to be cast in China began in the Guangxu period of the late Qing Dynasty. Therefore, most of the coins seen in the coin collection market are from the late Qing Dynasty and the Republic of China. The most representative silver dollars in the Republic of China were “Yuan Datou” and “Sun Xiaotou”, which were cherished by collectors. Very rich in investment value. 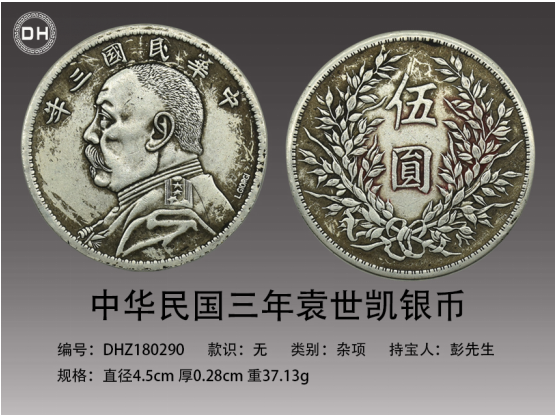 近日，廣州德鴻公司有幸征集到彭先生的一枚中華民國三年袁世凱銀幣，直徑4.5cm，厚0.28cm，重37.13g，為機制銀幣，正反面紋飾字體清晰，有著自然的銀銹包漿，品相不錯，頗具收藏價值。銀幣正面為袁世凱戎裝左側半身像，刻畫深邃，五官傳神，制作精細，頭發、肩章、襟章和綬帶等細節立體清晰，甚是精致，因幣面鑄有袁世凱像，故被稱之為“袁大頭”；肖像上列“中華民國三年”繁體字樣，字體端莊工整，挺拔清秀。值得注意的是，袁世凱頭像的后側下方有英文“L.G IORGI”字樣，英文簽字十分細小，是在華外籍鑄幣專家意大利雕刻師“魯爾治·喬治”簽名縮寫，俗稱簽字版袁大頭。銀幣背面飾有嘉禾紋，左右交互，下系結帶，中鑄“伍圓”字樣。藏品經漫長歲月流傳至今，帶著歷史的痕跡，更添美感，再加上簽字版袁大頭素來稀少，更顯其珍貴，實為一枚不錯的錢幣珍品，值得收藏。       Recently, Guangzhou Dehong Company had the honor to collect Mr. Peng’s three-year Yuan Shikai silver coin of the Republic of China, with a diameter of 4.5cm, a thickness of 0.28cm and a weight of 37.13g. It is a mechanism silver coin with a clear font and a natural silver rust patina. The appearance is good and quite collectible. The front side of the silver coin is the left bust of Yuan Shikai, depicting the deep, the five senses, the fine making, the hair, the epaulettes, the badges and the ankle straps, etc. The details are three-dimensional and clear, and the exquisite, because the coin surface is cast with Yuan Shikai, it is called "Yuan The big head"; the portrait on the "Three Years of the Republic of China" traditional Chinese characters, the font is dignified and neat, straight and delicate. It is worth noting that under the back side of Yuan Shikai's head, there is the English word "L.G IORGI". The English signature is very small. It is the abbreviation of the Italian engraver expert "Rulge George" in China, commonly known as the signature version of Yuan Datou. The back of the silver coin is decorated with Jiahe pattern, which interacts left and right, and the lower tie is tied with the words "Wuyuan" in the middle. The collection has been passed down for a long time, with the traces of history, adding a sense of beauty, coupled with the signature version of Yuan Datou has always been rare, more precious, it is a good coin treasure, worthy of collection. 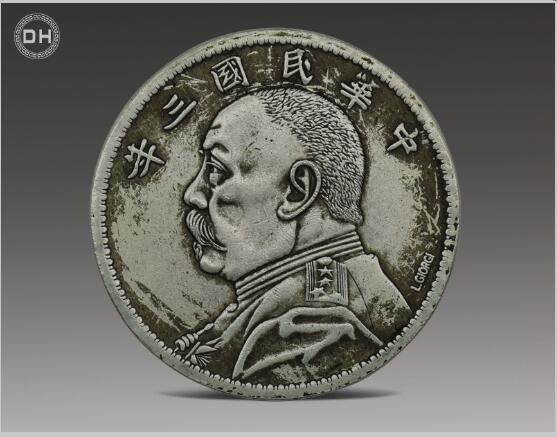 錢幣雖小，所凝聚的文化內容可謂是十分不凡。就袁大頭錢幣來說，它的正面人物像彰顯出了當時的執政者為袁世凱，文字則揭示了“民主、共和、憲政及君主立憲”之思想希冀。背面的嘉禾紋飾亦是值得細細品味。古代把一禾兩穗、兩苗共秀、三苗共穗等生長異常的禾苗稱為“嘉禾”，人們認為它們是政治清明、天下太平的征兆。鑄在錢幣之上寓意國家重視農桑、以民生為本；其另一思想取其嘉禾之諧音，寓意“家和萬事興”之意。毋庸置疑，此幣有著極深的寓意，故有很高的收藏研究價值。       Although the coins are small, the cultural content that is condensed can be described as extraordinary. As far as Yuan Datou’s coins are concerned, its positive figures show that the governor at that time was Yuan Shikai, and the words revealed the ideological hopes of “democracy, republicanism, constitutionalism and constitutional monarchy”. The Jiahe ornament on the back is also worth savoring. In ancient times, the seedlings with abnormal growth of one and two ears, two seedlings, and three seedlings were called “Jiahe”. People think that they are signs of political clarity and peace. Casting on the coins means that the state attaches importance to agriculture and mulberry, and it is based on the people's livelihood; its other idea is to take the homonym of its golden sand, meaning "home and everything". Undoubtedly, this coin has a deep meaning, so it has a high value of collecting research. 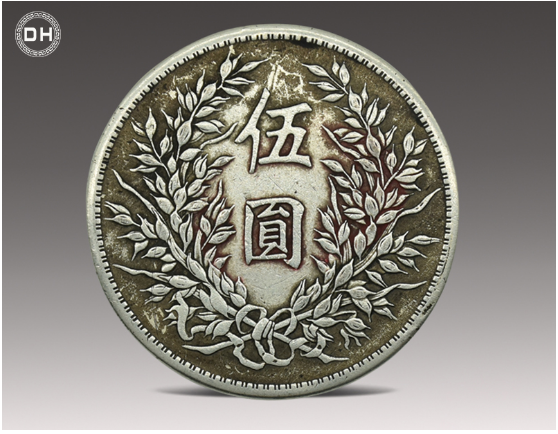 機制銀幣在中國近代社會曾經流通和使用了一百多年。當時，在市場上流通的形形色色的銀幣，包括本國制造的各種銀幣，還有幾十種在中國的市場上流通的外國銀幣，品種共計達九百多種，銀幣的流通對中國近代社會經濟起到了深遠的影響。此外，這些銀幣流傳至今因著獨特的價值成為了人們珍愛的收藏品，備受青睞。      The mechanism silver coin has been circulating and used in modern Chinese society for more than 100 years. At that time, all kinds of silver coins circulating in the market, including various silver coins made in the country, and dozens of foreign silver coins circulating in the Chinese market, the variety of more than 900 varieties, the circulation of silver coins to China's modern social economy Has had a profound impact. In addition, these silver coins have been popular since the unique value has become a favorite collection.     “袁大頭”作為近代中國幣制變革中的一個重要角色，對促進市場流通起到了很大的積極作用，并贏得了當時百姓的廣泛認可，在我國的錢幣史上具有非常重要的地位。而對于錢幣收藏界來說，袁大頭錢幣則是有著“銀元之寶”的美譽，至今仍是收藏市場上的重頭戲，得到了眾多藏家的喜愛，市場非常明朗。彭先生的中華民國三年袁世凱銀幣外觀造型美觀，包漿醇厚圓潤，銹色古舊自然，色澤明亮有光澤，具有很高藝術觀賞價值和投資收藏價值。如您有意向收藏此幣，歡迎致電廣州德鴻公司。      As an important role in the modern Chinese currency reform, Yuan Datou played a very positive role in promoting market circulation and won wide recognition from the people at that time. It has a very important position in the history of Chinese coins. For the coin collection industry, Yuan Datou coin has the reputation of “the treasure of silver dollar”, and it is still the main event in the collection market. It has been loved by many collectors and the market is very clear. Mr. Peng's three years of the Republic of China Yuan Shikai silver coins look beautiful, the patina is mellow and round, the rust color is old and natural, the color is bright and lustrous, and it has high artistic appreciation value and investment collection value. If you are interested in collecting this currency, please call Guangzhou Dehong Company.